The Sound of Fish Dreaming 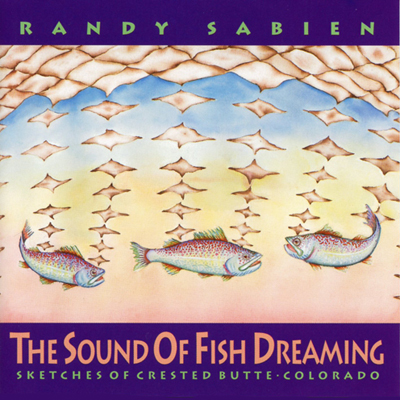 The Sound of Fish Dreaming

In 1987 I was invited to be an artist in residence in Crested Butte, CO. I left Eau Claire in early February with my brand new state of the art recording device - a four channel cassette deck. That's right - cassette. This was the first affordable technology for multitracking in a home studio setting. Prior to this it was two inch tape machines with a 24 track mixing console in an expensive professional studio - not something I could afford to do on a regular basis so this breakthrough was liberating for musicians like me. The schedule of the residency gave me a great opportunity to put it to use as I was done with my teaching at noon and was provided a studio space in the school to develop new material. I had a piano, my guitar, mandolin, and violin and I would write and record original music all afternoon. Inspired by the stunningly beautiful environment of this small village nestled in the Rocky Mountains a set of tunes emerged that I eventually called "The Sound of Fish Dreaming - Sketches of Crested Butte, Colorado."

I returned to Wisconsin at the end of April with ten new compositions fleshed out in rough draft on my tape recorder. On December 15, 1987, I gathered a band together in Madison's Smart Studios and we recorded "Westward...," "Jokerville," "Sound of Fish Dreaming," and "Big Horn Balloon." I remember braving the remnants of a winter storm to get to the studio from the cornfields of Stoughton. The band was Jeff Eckels-bass, Steve Eckels-guitar, Dan Kleiman-keyboard, and Todd Steward-drums/percussion. Collectively they were a band called NEO. We mixed it the next day and I had a demo to shop around to labels. Because the nature of this music was more impressionistic and "new age" and less bluesy or swing I thought alternative labels like Windham Hill would be a good fit. Of course, nothing ever materialized on that front so I released it myself after Fiddlehead Blues.

The project sat dormant until November 1990 when I was in the middle of a year long residency in Sheboygan, WI. I arranged some sessions at Midiwest studios outside of Appleton,WI with Larry Darling engineering. I recorded "El Dorado" and "For the Children" with Dane Richeson-drums and percussion, John Harmon-keyboard, and John Gibson-bass. The rest of the material I recorded by myself overdubbing violin, guitar, mandolin, and mandocello. Three of the pieces have been arranged for full symphony and I often perform them with community orchestras. The artwork for the cover was done by the artist that I lived with in Sheboygan, Tom Uebelherr who, in addition to being a painter, made electric guitars carved into dog shapes and had an amazing collection of old radios.

"Westward Across the Prairie Into a Dream" - started off as a piano piece. It's the "soundtrack" to the journey from the north woods of Wisconsin across Iowa and Nebraska to the magical setting of Crested Butte.

"Roaring Judy" - this is a particular stretch of the East River south of town where I spent considerable time fly fishing for trout. Originally a guitar instrumental, I added three mandolin tracks for a David Grisman influenced "newgrass" style piece.

"El Dorado" - this was a local music nightclub where everyone met to dance and party. I went there the first night I was in town and the band, Robert J., was from Madison, WI! This started off on piano as a Santana-like groove. The tag ending with the ever increasing rests between each phrase is my idea of a musical joke.

"Jokerville" - this is the name of one of the more challenging ski runs on the Crested Butte mountain. I had seen the Talking Heads movie "Stop Making Sense" a couple of times and I was enthralled with their music. Jokerville started off by just imitating one of their guitar driven grooves and humming my own melody over the top.

"The Sound of Fish Dreaming" - over spring break I stayed in a log cabin outside of town at Cement Creek Ranch. One day I was standing at a picture window overlooking a large pool in the creek. The water was so clear I could see the trout holding their positions on the gravel bottom. Every now and then they would dart around or drift up towards the surface to feed. The weather was wild - a blinding blizzard one minute then clear and sunny the next. I stared out at this surreal scene with my guitar strumming a rhythm on a chord and humming a melody.

"Big Horn Balloon" - this hot air balloon company would launch their rides early in the morning while the air was calm and drift around the valley for a couple of hours then float back down often landing near the schoolyard. It was always a challenge to keep the children's attention when that was going on outside the window!

"Elk Avenue" - the main street was dirt the first year I lived there and very funky - in the best sense of the word - and full of interesting shops and comfortable places to hang out. This is a guitar instrumental ala Ry Cooder spun out onto fiddle and mandolin fading out with a "percussion" jam.

"Jack's Cabin Cutoff" - a straight up old time fiddle tune named after a shortcut to Crested Butte from Taylor.

"Donita's" - a "south of the border" flavored guitar instrumental named after the local Mexican restaurant. I think it's Spanish for "small donuts"...

"For the Children" - a piano instrumental with a vamp for soloing. I overdubbed three part violin harmonies for the final version. I love John Harmon's piano solo on this and Dane Richeson lays down an exhilarating groove - especially on the snare under the violin solo. Listen for the triangle at the very end.

"Two Coyotes Say Goodbye in Cement Creek Canyon" - there was a cello lying around my studio and I messed around on it from time to time. The theme from Westward Across the Prairie popped up in a slow version. As a reprise to the opening piece I close the album with a version performed on mandocello. The image is from Cement Creek Ranch where I would observe coyotes playing in the meadow.